I formatted an external SSD—using Mac’s Disk Utility, Windows’ diskpart (in terminal), and GNOME’s GParted—from APFS to exFAT to NTFS to EXT4. It was once a Macbook’s internal storage.

I had some trouble getting it recognized by the Freedombox, hence all the reformatting. I was hoping to just have it as exFAT because it works across all OSes, so adding and removing files would be easy.

Sometimes, when it was recognized (appearing in System > Storage), I couldn’t add it as a Backup location or use it with Samba. I read something on this site that implied exFAT and NTFS drives couldn’t be used for sharing, so I formatted it to EXT4.

After the last few rounds of reformatting, it wouldn’t appear in Plinth at all. I can see it in Cockpit, but it says it has no capacity, and the serial number is wonky. 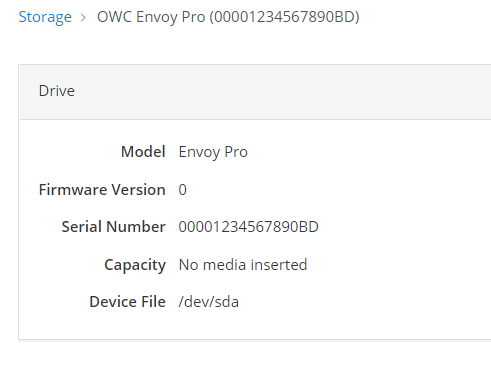 I’m not sure what’s going on, because the drive mounts without issues in Manjaro GNOME.

If the drive’s serial number is incorrect and it should not readable properly, it is unlikely to be FreedomBox related issue.

If I were you, I would check if the power supply to the drive is sufficient. Is the drive externally powered or powered by your single board computer? Try powering it externally. Does the power adapter supply enough power? Try a power adapter with higher amperage but same voltage. If this is the pioneer edition, you can provide extra power using another power supply to the mini-USB port. Please see Olimex’s forums and documentation for more information.

I don’t know if the way the serial number is displayed is related; I just know that the drive was shown in Plinth when it was formatted as APFS. However, before I started using it, I remembered it was an encrypted APFS drive, so unusable. Now, after being formatted, it won’t show up in Plinth.

How might I check if supply to the drive is sufficient? It’s only bus-powered, and has no problem being powered in laptops and desktops. This is the enclosure in which the SSD resides; it can’t accept external power from an adapter.

And it is a Pioneer box.

It’s only bus-powered, […] it can’t accept external power from an adapter.

you can provide extra power using another power supply to the mini-USB port.

(Try connecting an additional power supply to the port of the pioneer box, so that it’s powerd by two power supplies.)

Thanks. I’ll look around to see if I have any mini-USB cables lying around… and, I guess, a brick that can provide the correct amperage but same voltage, quoting what Sunil said.

@sunil and @NickA, might using a USB hub with its own power (something like this) accomplish a similar?