I have duplicated network connections for my Ethernet interface on my Raspberry Pi in Network Manager.

Thanks for your reply. 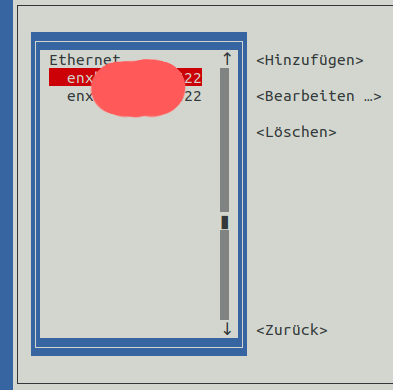 Plinth also shows two connections for the same interface. One is inactive.

I can’t explain this behavior.

NetworkManager does not assign an IP address, your IP address gets assigned by your gateway. Unless you assign the device a static IP address (in the gateway, i.e. in the admin portal for your router), every time the device connects it will get a new DHCP lease and (potentially) a new IP address.

I tried to assign a static ip-adress on my DHCP-server but it is not working.

It looks to me like each Network Manager connection profile gets its own IP address from the DHCP server. But since the profiles switch on reboot, the IP address of the Freedombox changes as well.

Anyway. I think that the problem would be solved if Network Manager did not create two connections for a single interface.

It looks like systemd-networkd and NetworkManager are both activated on my freedombox. Maybe that is the cause of my problems. What is the standard configuration on a freedombox? Should I deactivate one?

Mine has NetworkManager running, and does not have systemd-networkd. I think you are right, from what I am reading it does look like running both can cause issues/conflicts.

Perhaps you have cracked the case?

If you comment out your network/wifi cards in /etc/network/interfaces that allows NetworkManager to get full control of those interfaces. Freedombox uses NetworkManager to configure networking, so by doing this you are using the configuration method expected by the Freedombox team. Perhaps you see this because there is an entry in /etc/network/interfaces for that network card.

Here’s what my /etc/network/interfaces has:

# This file describes the network interfaces available on your system
# and how to activate them. For more information, see interfaces(5).

There is no entry for my ethernet or wifi card in this file.